Silent is now Silent Plus

News / Press Releases 02 August 2021 Hits: 723
Silent is now Silent PlusThe new Silent Plus 8100H replaces the previous Silent 8400H and Silent 7400H models. Featuring cutting-edge technology, it offers higher performance and has a thin, compact internal diffuser.
Lugo di Ravenna (27 August 2021) - Following nearly eighteen months of development, the latest generation of Silent air conditioners has arrived, with the new Plus versions offering never-before-seen performance and ergonomics. The new Silent Plus 8100H replaces the previous Silent 8400H and Silent 7400H models and is packed with highly advanced technology. For example, we’ve poured considerable resources into the design of the new internal diffuser. Like the e-Van model intended for camper vans, this latest diffuser is more compact and has better forced ventilation control.
“One of the most evident changes is the modern-looking internal unit. This now features an ultra-flat diffuser with a tapered profile on both sides, integrated lighting and a talking display”, says Raul Fabbri, one of the two founder-owners of Teleco and Telair. “However, we’ve also made other improvements. For example, the new optimized diffuser increases ventilation power without raising noise levels. So the air flow rate is now an impressive 450 m3/hour”.
The new diffuser is much more compact than the previous one. Measuring just 45x45 cm (against the 51x52.5cm of its predecessor), it can easily be installed in the living compartment passageway without obstructing wall unit doors, the wardrobe door or the living area door. It’s also significantly thinner, down from a thickness of 6.2 cm on the Silent version to just 4.2 cm on the Silent Plus version, thus enhancing the overall ergonomics of the living area. Like previous models, the Silent Plus operates with a high-efficiency heat pump; providing high heating power at very low consumption rates, it can effectively heat the interior of a motorhome or caravan even with outdoor temperatures as low as 4 °C.
“What’s more, the new diffuser lets users retain the ability to wash the filters very quickly. We’ve also added a ventilation function. This is handy when you simply want to circulate room-temperature air through the vehicle”, continues Raul Fabbri. “The new remote control has a more appealing, modern design and a larger display. It also has two ‘fast’ keys to select the cooling or heating function and thus bring the vehicle interior to the desired temperature quickly. There’s also the handy lighting function, where the LED converts into a powerful torch that can be used at night without disturbing the other vehicle occupants”.
Note that the Silent Plus 8100 uses the R32 coolant, in line with a Teleco environmental policy that has seen all air conditioners use this gas since 2020. R32 ensures high performance but has less environmental impact than other solutions. For example, it has zero ODP (Ozone Depletion Potential). Moreover, its GWP (Global Warming Potential) is approximately half that of the R407C gas, the equivalent of an approximately 70% reduction in environmental pollution compared to the gases used until now.
“Making this switch - which is perfectly in line with our philosophy of lowering environmental impact and adopting solutions that improve product sustainably - was not as simple as some might think. The R32 gas operates at high pressure, which meant we had to adapt all the systems with larger pipes and fittings and then subject all the technical modifications to a long series of thorough tests. Now, in the event of a leak, any pollution will be less than half that caused by the R407C gas, which is still used by some air conditioning manufacturers, even in the RV sector”. 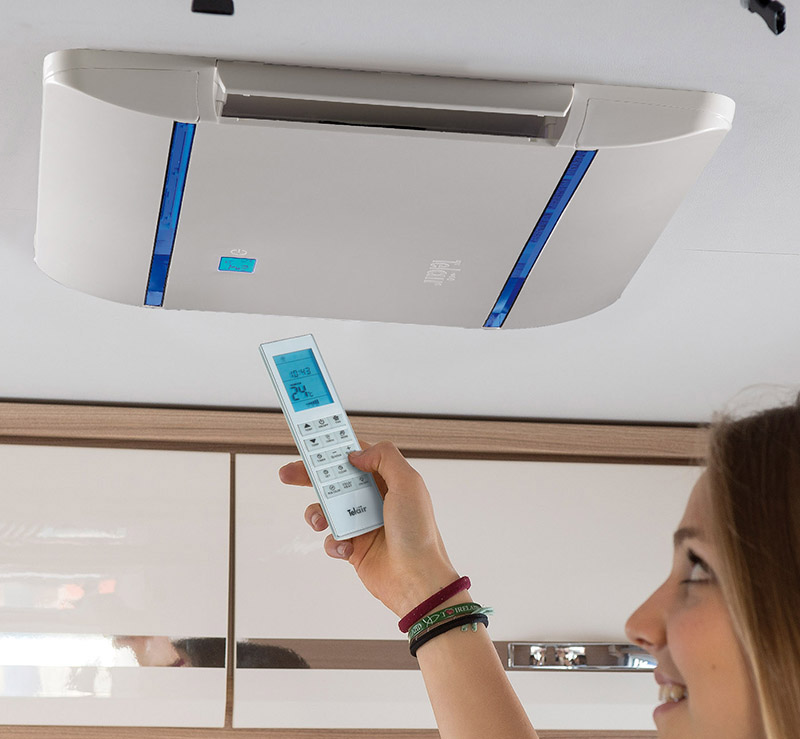 Save the press release